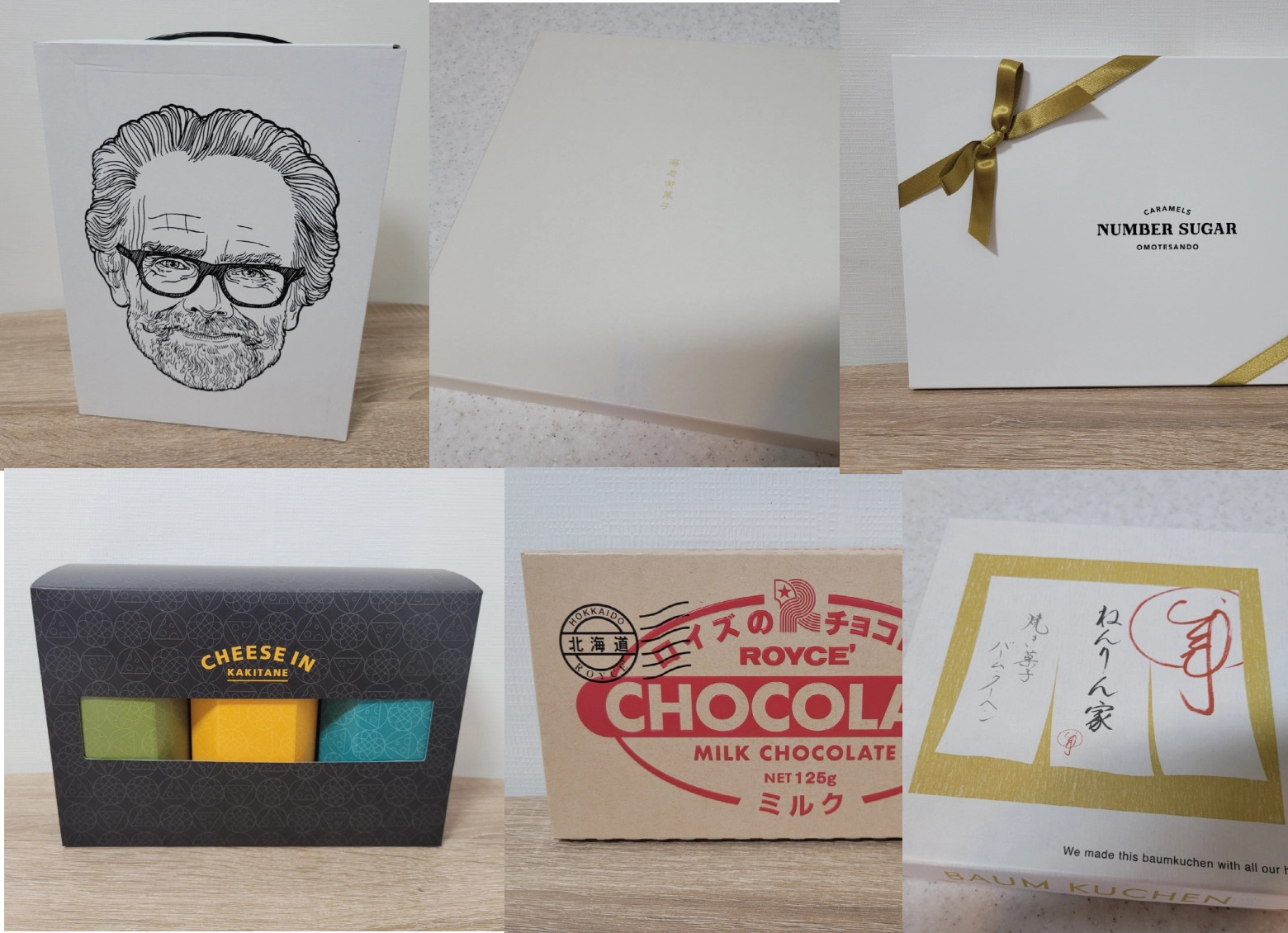 Japan has a culture of bringing a gift of food when visiting someone’s house, whether that’s a friend, a colleague, or an associate. As such, a delightful subset of the food industry has developed that specializes in snacks and sweets dressed up in nice packages and often divided into individual servings–which also happen to make great souvenirs when you travel. You can usually find these on the food floor of department stores (often a basement floor) and in airport gift shops, though cafes and restaurants may also sell their own versions.
There are hundreds of different “temiyage” (“souvenir food”) sets, even beyond the basics like Tokyo Banana. Where do you even start to pick one? Well, our Korean-language reporter, Soon Pyon’s, has some recommendations for you. Though he now lives in Korea, Soon Pyon’s spent half his life in Japan and developed a fondness for some special temiyage that he makes a point of buying every time he visits Japan. So here are six lesser-known temiyage you should buy the next time you’re in Japan–or the next time you need something to bring to someone’s house.
And the Friet’s Dried Friet

And the Friet is a French fry specialty store with branches in Nagoya and the high-end Tokyo neighborhood of Hiroo. In addition to fresh French fries, they also make “dried friet”, or French fry-shaped potato chips.
What Soon Pyon’s recommends is the “Okamochi” (3,210 yen [US$22.61]), which is a box of individually packaged servings of dried friet that comes with a nice handle. The box has a print of a mysterious bearded man on the front, but that just adds to its hipsterish charm. It’s a pretty sturdy box, so once Soon Pyon’s emptied it of dried friet, he began to use it as a storage box.
Speaking of, the box comes with six bags of dried friets: two salt-flavored and four other assorted flavors.

The dried friets take the shape of French fries, but their texture is hard to explain. The exterior is crunchy, while the inside is somehow both crunchy and fluffy.

They’re quite different from any other kind of potato snack. Plus, they’ve retained the original flavor of the potato even through the cooking process, down to a faint sweetness. Soon Pyon’s favorite flavor is garlic anchovy.
Keishindo’s Aburiyaki Shrimp Sembei

Soon Pyon’s second recommendation is Nagoya-based, shrimp-flavored sembei (rice cracker) specialty store Keishindo’s aburiyaki, or chargrilled sembei. The store isn’t only in Nagoya and has branches all over the country, including at Narita Airport.
Soon Pyon’s bought the Aburiyaki 18-pack (2,160 yen). The box is really kind of stylish in its minimalism, with a pure white color and only ebi okashi (“shrimp snacks”) embossed in tiny gold kanji on the front, perfect for gifting to someone.

Keishindo is famous for turning the whole shrimp into a “cracker” on its own while retaining the original shape of the shrimp (called sugatayaki), but Soon Pyon’s actually likes their aburiyaki better. While the sugatayaki is basically just the shrimp itself and is delicious in its own right, Soon Pyon’s believes that the aburiyaki somehow have the better shrimp-packed flavor. For the record, Soon Pyon’s favorite flavor is shrimp almond.
Kakitane Kitchen’s Cheese in Kakitani

The third item on our list is from mochi cracker specialty shop Kakitane Kitchen: Cheese in Kakitane, roasted mochi crackers filled with cheese cream. These are available all across Japan. Soon Pyon’s purchased the Cheese-in Kakitane 3-Box Set (1,782 yen).
Each box contains a different flavor. Green is for truffle salt, yellow for black pepper, and blue for smoked salt.

There are eight bags in each box, and each bag contains six oversized kakitane baked from a mixture of cheese and rice flour and filled with cheese cream. In Soon Pyon’s opinion, it’s the perfect serving size to accompany a 500-milliliter (17-fluid ounce) can of beer.

They’re quite different from regular kaki no tane snacks, but they’re really quite delicious. They all pair great with beer, but Soon Pyon’s favorite is the smoked salt flavor.
Royce’s Milk Chocolate Bar

Royce’ is a famous brand of chocolate hailing from Hokkaido, and Soon Pyon’s recommendation is their milk chocolate bar (432 yen). While Royce specialty shops only exist within Hokkaido, other stores throughout Japan sell their chocolate, especially in Okinawa and Kyoto. On very rare occasions, you might also spot it in supermarkets, but of course, you will almost always be able to find it at airports.

Those who’ve lived in Japan might know Royce chocolate and might not think it’s anything special. What’s more, what Soon Pyon’s actually recommends is not even their special chocolate cream but in fact their plain old chocolate bar.
Why? Because this is *the chocolate bar*, he says. It’s so much more delicious than other chocolate bar brands. Perhaps because it’s produced in Japan’s dairy capital, the milky flavor of this chocolate is considerably potent, even more so than the fragrance of the cacao. Once you try this rich and smooth chocolate, you won’t be able to eat any other kind of chocolate bar.
Number Sugar’s Caramels

Based out of the shopping district of Tokyo known as Omotesando, but with a total of four branches in the Tokyo area, Number Sugar sells delicious caramels. What Soon Pyon’s purchased was the 36 Pieces Box (4,180 yen), which comes with three of each of the twelve flavors.
The caramels are all hand-made, and the box even comes with a little explanation booklet of all the flavors.

As soon as you open the box, the sweet aroma of caramels wafts up, bringing joy along with it. The caramels have a super rich milky, buttery flavor, and as soon as you bite into them, they melt in your mouth. The only danger is that you’ll want to try all the flavors, so you might end up eating the whole box in one sitting.

Number Sugar’s shops are just as stylish as their caramels. They also sell the flavors individually in the store, so you can just buy handfuls (or bucketfuls) of your favorite. Soon Pyon’s, by the way, is the orange peel flavor.
Nenrin-ya’s Baumkuchen

Nothing beats Baumkuchen cake when visiting a friend for tea, and Nenrin-ya, a specialty store based in the swanky Tokyo neighborhood of Ginza, makes some of the best. The store also has branches in other parts of Tokyo and in Kanagawa and Osaka, and pop-op shops tend to appear in other regions for limited times as well, so they aren’t super hard to find.
Soon Pyon’s recommendation is the Mount Baum Shikkari-me (1,728 yen for the “single mountain” size shown below). Nenrin-ya makes two different kinds of Baumkuchen, the wavy “mountainous” one like this one (Shikkari-me) and the standard smooth, wheel-shaped cake (Yawaraka-me). They also make them in different flavors, including matcha, but Soon Pyon’s favorite is far and away the plain Shikkari-Me one.

While the Yawaraka-me is, of course, also delicious, Soon Pyon’s can never get enough of the Shikkari-me’s crispy exterior and delicious buttery flavor, which just fills your mouth with every bite. It’s perfect with coffee.
Soon Pyon’s likes this Baumkuchen so much that, just once before he dies, he’d like to have the largest size, which is five times the size of this one, all to himself (though, if he’s being honest, he’d probably never be able to eat it all).
Soon Pyon’s has other recommendations for other parts of Japan, but on his latest trip only managed to stay around the Tokyo area, so he’ll save those for another day. But even if you’re outside of Tokyo and not in an area these souvenir foods are sold, you can also order them online, so if you live in Japan, definitely give them a taste. They may be a little more expensive than ordinary snacks, but it’s okay to splurge once in a while, even if you don’t plan on sharing them!
And if unique is what you’re going for when it comes to temiyage, look no further than these croissants and cakes made from silkworms. Your friends will surely be impressed–even if they don’t want to try them.
Photos © SoraNews24
Related: AND THE FRIET, Keishindo、Kakitane Kitchen, ROYCE’, NUMBER SUGAR、Nenrin-ya
● Want to hear about SoraNews24’s latest articles as soon as they’re published? Follow us on Facebook and Twitter!
[ Read in Japanese ]
Follow SoraNews24
© SoraNews24 -Japan News- / SOCIO CORPORATION