Upcoming Events
On reinvention and their long relationship with Japan
Patrick Balfe
The name !!! has been synonymous with dance-punk and alternative dance music since the early 00s. Refusing to repeat themselves, every one of their releases has been a step forward for the band in a constant process of growth and reinvention. Now, with the release of their 9th album, Let It Be Blue, they’ve broken the mold once again, with a stripped-back, minimalist and production-heavy album that ultimately remains undeniably danceable. Ahead of a run of shows in Japan this September, we were lucky enough to chat with Nic Offer, the band’s lead singer, about the new album and their long-standing relationship with Japan.
Metropolis:  Congratulations on the new album. The first thing that stands out is it’s a lot more minimalist than previous albums, is doing something different something you’re generally conscious of when you’re going into a new recording?
The new album Let It Be Blue
Nic Offer :  We are conscious of it, but it’s more that we’re constantly on a journey moving forward. So by the time we get to the next record, we’re in a different place. We’re working on the next record right now, we’re doing different things right now that sound different than the last record. I think it’s also just part of what post-punk is, is that you’re supposed to find something new. It’s supposed to be something new, always. So it’s never been about being attached to a sound, it’s always kind of about creating something new and making something new happen.
But all that said, there definitely was a conversation at the beginning when we’d started working on the record, but then the pandemic happened and it was like, Okay, well, this is going to affect the record and let’s use that as a way to make it a different sounding record. Let’s like, absolutely embrace that part as a part of it. And I think that working on the tracks separately, online from each other, definitely contributed to a more minimal sort of thing. The minimal thing, too, is just something you’re always working towards as an artist, paring it down to the nugget, the actual idea, so there was a bit of that.
M: Are you listening to much contemporary dance music? To what extent does what you’re listening to play into the writing process?
NO: I think it does. It’s so weird because it both does and it doesn’t. Absolutely, we’re definitely always listening to new music, we feel like that it’s important to. But at the same time, we covered an R.E.M. song on this record. I hadn’t listened to that song in years but it’s in me, you know? You start working on something and it just happens. But in general, we’re not those people who are like, music is over, we’re always trying to figure out where it’s going next and what it’s doing right now. That part is really exciting to us.
M: You mentioned that you produced this album almost entirely online. Can you elaborate a little bit more on that process?
NO: Well, I wouldn’t say it was entirely online because there was a point where we were making it in the studio with each other. But we just put up our Ableton sessions and then we could all open up each other’s sessions and just kind of work on it from there. It was a good way to see what other people were doing, maybe I add something to this and they add something to one of mine. So that was the main way that we were using it online which, honestly, I love and we’ve put up new sessions since. I think that will remain a part of the process for us from now on. 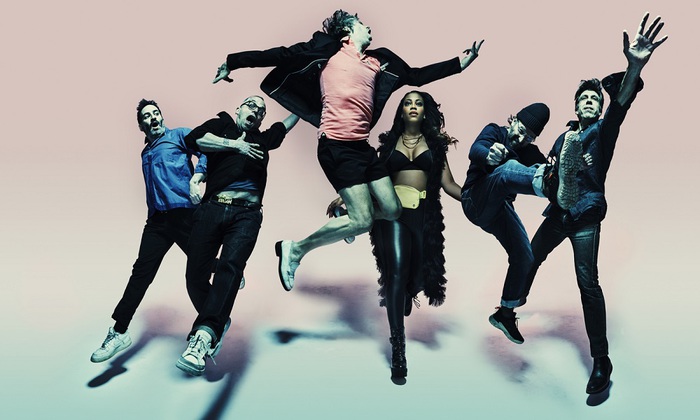 M: Guest collaborators has been a consistent theme for the band for over ten years. What is it about working with guest collaborators that you keep coming back to?
NO: It’s kind of like the ‘make new friends, but keep the old’ kind of thing. You get used to each other and how each other operates and having someone different in the room changes the conversation and makes different things happen. As a writer, you’re always looking for that thing in the room that’s like Oh, I haven’t seen or heard that before. Usually you have to do that yourself and with someone else in the room it just starts happening so it’s just a fun part. And it’s part of what we’re good at. I think other musicians aren’t as open as we are, and we don’t give a shit,  we’ll take an idea from the intern’s cat and give them credit, you know? It’s about making a good record.
M: How does that affect the communication process? Do you find yourself having to change tact in order to communicate with different kinds of people depending on what the goal is?
NO: It is a bit of that kind of, yeah, ‘cause you have to realize that not everyone’s going to work like we do. And not everyone’s used to that sort of openness. So it’s just about communicating and learning how to read the room. It’s interesting with production, because so much of being a good producer, I feel, is knowing how to read the people and work with them. Because when I first thought I could produce and I worked with some people I thought man, I can’t make them do the work. So I find that good producers are good at opening those people up to it. So we’ve gotten better at that but maybe being a good producer is always getting better at that.
M: What’s the process been like getting these tracks ready for live shows?
NO: It’s been interesting. It’s always kind of interesting, once you finish the record and start playing it, to see how the songs work live. And it’s actually one of the things that I think has been interesting about this record is, since we never played the songs until now live, there are things we would have done differently. A song like “Panama” really works for the record, but it works more for listening at home. When we started playing live, I was like, Ah, I would do this here and do this here, you know? So we had to make adjustments, which is also part of what’s fun about it and makes the show a different thing. So, it’s still a part of the process but our hope also is that it influences the next record in a different way since I think that the next record will also have many songs made on the computer with lots of production. But I think other songs will have more of a live, fleshed-out kind of thing and hopefully that makes it a different record than this one.

M: I want to talk about your relationship with Japan a little bit. You’ve been coming here consistently for about 15 years. Was Fuji Rock 2007 your first trip here as a band?
NO: No, we must have come when Louden Up came so 2004 or 2005. Yeah. So it’s getting up there. It’s getting close to 20 years soon.
M: How did that relationship with Japan start?
NO: It was just when our second record had come out that we went to Japan and, as young punk rockers from Sacramento, if you knew anyone who had gone to Japan it was like Wow! Thats Crazy! So I think the first time we came I was on a press trip before we even played, I came with John and we were absolutely totally excited and I do remember this actually, the very first show we played in Tokyo, they put out a live record of it in Japan, I think it’s called Live Live Live. I don’t know that I even own a copy, I haven’t seen one in two years, but I think I listened to it once, right back then, and I was like, Yeah, this is fine. But it is interesting that that was ‘the moment.’ That was the first time that we played in Japan and I do remember that we were straight off the plane pretty, you know, fucked, but we were in the middle of that tour and we were kicking ass. So I remember being like, that was a good show. And so when they wanted to put it out live I was like, Yeah, sure. So that was my first impression. It’s remained one of our favorite places to play for sure.
M: A lot of bands find it hard to break into the Japanese market. What do you think it is about !!! that has helped you crack it?
NO: I don’t know, I think it’s an exciting live show. And it seems like we usually do well live there. And when we do the interviews, it seems like people give a shit and have listened to the record. And quite often the most in-depth questions I get on the whole press run are from Japan. So it seems like they’re really paying attention. I think that’s just a thing that happens, if they start paying attention to you in a country they take you seriously and will check you out. I don’t know that I can give an answer that I would be satisfied with, I think each country is just really different in the way they work.
M: You mentioned earlier that you have already started working on the 10th album, do you already have a release date in mind?
NO: I imagine they’d probably tell us to give it a rest and it will come out sometime in 2024. We never stop working, we’ve kind of just branched it out a little bit. Rafael just had a project called Los Latidos come out in Japan on a Japanese label. I was just working today with some guys from Pittsburgh Track Authority. Rafael also has a project called Las Palabras. So we’re always just doing stuff and we’ll see what makes the record. We do as many projects as possible at all times. But I don’t know that I could say what the plans are specifically for the next record. I know we got a couple of bangers on it already and we’ll just see what happens from there.
!!! play Local Green Festival on Sunday September 4 and Shibuya O-East on Monday September 5.
The non-profit music festival changing Japan’s music scene
Jockstrap is a duo with wildly disparate backgrounds producing wildly varied yet totally singular output. Coming from the contrasting disciplines of electronic music and jazz violin, both artists share qualities of tireless perfectionism, work ethic and creativity, resulting in music,…
Your monthly dose of new music from Japan
Musician and activist Tom Robinson’s return to Japan
Fighting homogeneity in the Japanese music scene
Our roundup of the top events to check out this month
View All Events