The Department of Music is proud to welcome its newest faculty members joining the University of Arkansas.
Christa Bentley is an assistant professor of musicology at the U of A. Her research focuses on the politics of music at the intersection of folk and popular song. Her current research examines the confessional songwriting of the 1970s singer-songwriter movement, which is the subject of her first book Feeling Free: The Politics of the Singer-Songwriter Movement in the United States (under contract, University of Michigan Press). This project investigates how singer-songwriters provided a new language of musical protest that intersected with 1970s social movements—including the women's movement, anti-Vietnam War protests, environmentalism and Black freedom—arguing that within the context of the Nixon Era, the singer-songwriter's confessional songs emerged as a highly politicized form of communication. This research has also led to a published chapter in the Cambridge Companion to the Singer-Songwriter (2016) and a collaboration with the Grammy Museum, California Dreamin': The Sounds of Laurel Canyon (2014).

Her extended research looks at singer-songwriters in the 21st century, in both folk and pop contexts. She is co-editing a collection titled Taylor Swift: The Song, The Star, The Fans (under contract, Routledge) that emerged out of a 2021 virtual study day dedicated to the artist. The event drew 300 registered attendees, and the resulting collection brings together multi-disciplinary perspectives from an international cohort of authors.
Bentley received her Ph.D. in musicology from the University of North Carolina at Chapel Hill, where she was awarded the Glen Haydon Award for an Outstanding Dissertation in Musicology, and her B.A. from Texas Christian University. Before moving to Fayetteville, she held an appointment at Oklahoma City University and taught at Georgia State University. She previously worked with Yep Roc Records in Hillsborough, North Carolina, and with the presenting organization, The Bluegrass Situation, and she enjoys using her research to engage fan communities. She looks forward to connecting with the music community in Northwest Arkansas. 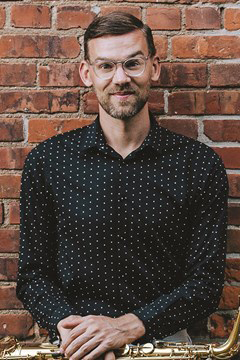 American saxophonist, Nathan Mertens (he/him) currently serves as the teaching assistant professor of saxophone at the U of A. As an active soloist and chamber musician, he has performed recitals in Japan, South Korea, Thailand, Croatia, Bolivia, the United Kingdom and throughout the United States. He has performed as a soloist with orchestras including the Busan Philharmonic Orchestra, Hastings Symphony Orchestra, The University of Texas Symphony Orchestra and the University of Arkansas Saxophone Ensemble. Mertens' orchestral experience includes performances with the San Antonio Symphony and the Omaha Symphony. In competition, he was awarded Third Prize in the 14th Kurashiki International Saxophone Competition, Second Grand Prize in the North International Music Competition in Sweden and has been a finalist for many national competitions.
Previously, Mertens lived in Tokyo, Japan, as a Monbukagakusho Research Scholarship recipient with the Japanese Ministry of Education, Culture, Sports, Science and Technology. As such, Mertens was the first American saxophonist to formally study in Japan. Realizing that awareness and access to Japanese music were lacking in the West, Mertens created the Japanese Saxophone Database, a resource to connect the rest of the world with all things saxophone in Japan. While in Tokyo, he performed with the Kunitachi Saxophone Ensemble, the Japan Saxophone Orchestra, Marie Kikuchi and Emi Kondo.
As an advocate for new music, Mertens has commissioned and premiered works by composers including Lucy Armstrong, Akiro Ito, Sachie Kobayashi, Andrew Boss, Rob Buckland and Zach Browning. He has premiered these works with many ensembles across the globe at the World Saxophone Congress, North American Saxophone Alliance Conference and other concert venues. Most recently, he commissioned Anthony Greene for a work entitled, "kWEe(a)r(e)," which centers around celebrating and uplifting queer identities.
As a clinician, Mertens has been a guest artist at institutions including the Conservatorio Plurinacional de Música, Oklahoma State University, South Dakota State University, Texas A&M International University, and will be at the University of Texas-San Antonio and UCLA this upcoming year. He has also worked with high schools throughout the Midwest and Texas. Mertens previously taught at Hastings College, Saxophone Academy Austin, Longhorn Music Camp and The University of Texas at Austin.
Mertens studied at The University of Texas at Austin-Butler School of Music, Hastings College and Kunitachi College of Music, with Stephen Page, Debra Rhodes and Masato Kumoi, respectively. Mertens is a D'Addario Woodwind Artist and a Yamaha Performing Artist and performs exclusively on Reserve products and Yamaha instruments. 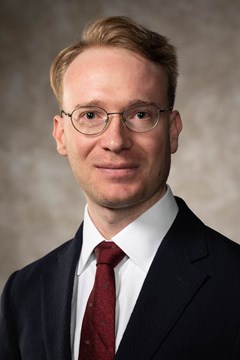 Pecos Singer is one of the next generation of cellists who is equally at home on both the baroque and modern cello.
He has appeared as a soloist with the U of A Symphony Orchestra, the San Francisco Conservatory of Music Baroque Ensemble and the Santa Fe Youth Symphony.
As principal cellist, he has appeared with the Arkansas Philharmonic Orchestra, The Orchestra Now (TON), the University of Maryland Symphony Orchestra, the Maryland Opera Studio, The Avanti Orchestra, the Londontowne Symphony Orchestra and the San Francisco Conservatory Baroque Ensemble.
Orchestral engagements include performances with the Washington Chamber Orchestra (D.C.), the New Orchestra of Washington (D.C.), the Fairfax Symphony Orchestra and the Annapolis Symphony Orchestra. As a Fellow in 2017, Pecos participated in the GRAMMY-nominated album of American symphonic music performed by the National Orchestral Institute Philharmonic, conducted by David Alan Miller.
An avid chamber musician, Pecos recorded two commissions by Zachary Friedland for string quartet sponsored by PICES, the North Pacific Marine Science Organization for their Effect of Climate Change on the World's Oceans (ECCWO) conference in June 2018. In 2022, Pecos curated a concert titled "Environmentalism in Contemporary Art" that paired Friedland's music with a live reading from Jenny Offill's novel Weather, read by the author. Past festival appearances include the Bard Music Festival (New York), Green Mountain Chamber Music Festival (Vermont), Hot Air New Music Festival (California), Zephyr International Chamber Music Course and Festival (Italy), the Decoda Skidmore Chamber Music Institute and the International Master Classes Baroque (Austria).
Pecos was formerly a Fellow at Bard College (2019-2022), performing with The Orchestra Now (TON), the orchestra-in-residence at the Frank Gehry-designed Fisher Center in Annandale-On-Hudson (New York). A finalist in the Coeur d'Alene National Young Artists Competition, Pecos is a previous recipient of the Carlsen Cello Foundation.
Passionate about service and leadership through music, Pecos participated for two years in the Conservatory in the Schools program, which brings conservatory trained instrumentalists into under-served communities to teach at public schools throughout the Bay Area. Pecos also participated twice in the Gratitude benefit concerts that support research into treating veterans who suffer from PTSD.
Pecos received his Bachelor of Music degree from the University of Oregon, Robert D. Clark Honors College and the School of Music and Dance. He completed his Master of Music degree with a historical performance emphasis at the San Francisco Conservatory of Music and completed a Doctor of Musical Arts at the University of Maryland. 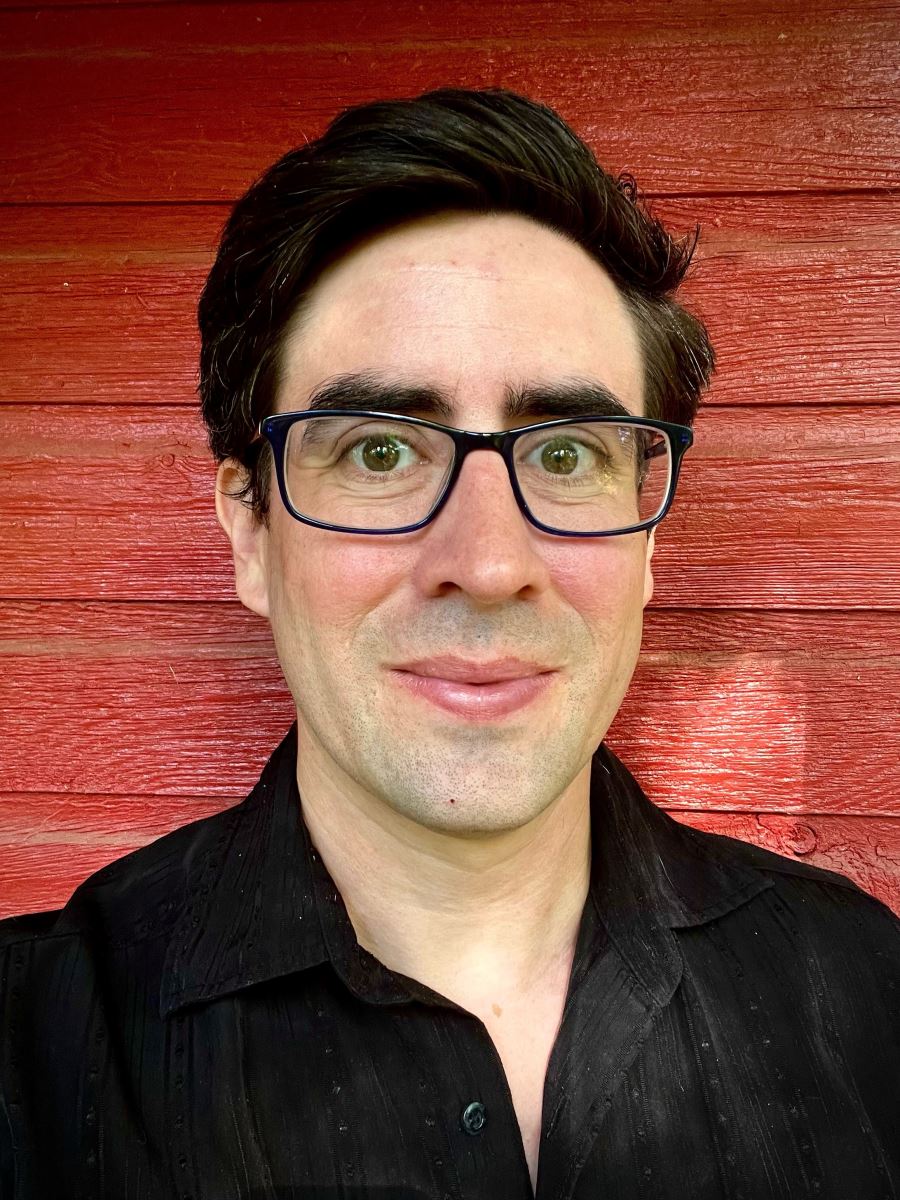 Garrett Jones has been a bassist for 25 years and along with teaching at the U of A, he plays with the Arkansas Philharmonic Orchestra and is the adjunct orchestra director and low strings instructor at the Arkansas Arts Academy in Rogers.
Jones is an alumnus of the U of A and got his degree in string performance.
His repertoire spans multiple genres of music including classical, jazz, musical theatre, blues, funk, folk, Latin, rock and gospel. He has toured the country extensively since 2008 playing with Broadway touring companies, jazz groups, folk concerts and classical ensembles. Jones has also played with such singers and groups as the Jake Hertzog Trio, Miles Ralston, The Vine Brothers, Brae Leni and Carmen Bruner.
Chase Jones also recently joined the staff as the leader of the Hogwild Band and assists with the Razorback Marching Band.
Britt Graves, administrative specialist III
Department of Music
479-575-4701, music@uark.edu
Daniel Reed, presidential professor in computational science at the University of Utah, will be the third of four chancellor finalists to participate in a public forum on campus.
Students, faculty and staff are encouraged to review the campus safety website, safety.uark.edu, and check or update their notification preferences for emergency RazALERT notifications.
The U of A's Master of Science in Operations Management Program and Bentonville Schools collaborated to incorporate workforce education opportunities in advanced air mobility.
Students, faculty and staff can sign up for the next Belonging Design Workshops, which are being held in the ongoing efforts to explore the concept of belonging on the Fayetteville campus.
From C.N.A. to B.S.N., Tiffany Trotter has piled up abbreviations signifying certifications and degrees, a reflection of her success as a registered nurse and online student living in McGehee.