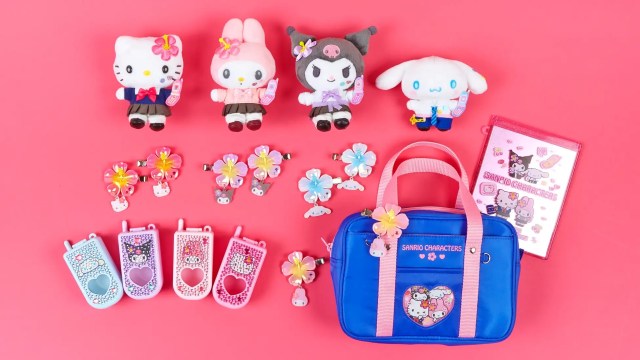 Hello Kitty was a success right from her debut in 1975, and during her decades of unwavering popularity she’s seen fashion trends come and go…and also come back again. So for her latest project the Sanrio star is heading back to the ‘90s with a new line of merchandise celebrating kogyaru schoolgirl culture.
First, a quick linguistics/history review. “Kogyaru” is an evolution of “gyaru,” which itself comes from the English “gal.” Gyaru were a pop culture phenomenon starting in the mid-1990s when flashy fashions and more assertive, outgoing personalities were in vogue among young women in Japan. When these trends trickled down to high schoolers, they became known as kogyaru, with the “ko” part coming from either koukousei (high school student) or ko (child/girl), depending on who exactly you ask.
▼ A kogyaru, equipped with several must-have items for the kogyaru lifestyle

Kogyaru culture went into a period of decline not long after the turn of the millennium, but the look is currently going through a revival in popularity in Japan. The years it’s been dormant mean it’s a fresh-feeling aesthetic for today’s teens, and between that and finely matured nostalgia among the now-grown-up original-generation kogyaru, Sanrio has decided the time is right for its Tokimeki Heisei Kogyaru Design Series.

Starting things off is a collection of strap plushies, though technically Sanrio calls them “mascot holders,” possibly to avoid confusing them with another type of strap we’ll get to in a second. Kitty, My Melody, and Kuromi all sport the short skirts and, more importantly, the voluminously baggy loose socks, which became a symbol of the era among schoolgirls. Of course, they all have a flip phone, with an antenna to keep in touch with their friends. Cinnamoroll, the only dude in the group, is dressed in slacks but still has a bit of ‘90s flair with what appears to be a wallet chain.

Speaking of flip phones, or garakei, as they’re now called in Japanese, Sanrio also has a series of six flip phone-shaped photo holders. But since no true kogyaru would be caught dead with a non-customized phone, you also get a sheet of stickers, like the ones ‘90s girls used to fancy up their phones, as well as a strap.

▼ Kogyaru had a custom of attaching multiple straps to their phone, sometimes so many that the cluster of decorations was bigger than the handset itself.

Of course, you can’t discuss kogyaru ornamentation without talking about purikura, or “print club” sticker pictures. While you can still find them in video game arcades in Japan, purikura booths used to be ubiquitous, and no day out with a group of kogyaru friends was complete without a commemorative sticker photo session, which is why the Tokimeki Heisei Kogyaru Design Series includes sheets of purikura-style stickers.

…a “school bag,” of the style common in the ‘90s, that’s actually a 21-centimeter (8.3-inch) pouch to put inside your actual bag as an organizer…

…this mirror, which proclaims “We loved the ‘90s! We’ll be best friends forever!”…

…and a series of blind-buy straps featuring the four back-in-the-‘90s Sanrio characters, a hibiscus, and the retro-tech trio of a flip phone, a disposable film camera, and a pseudo-Tamagotchi.

The mascot holders are priced at 1,980 yen (US$14), while the rest of the items ranges from 396 yen (the purikura stickers) to 2,420 yen (the mirror). The lineup goes on sale September 14 at Sanrio physical stores in Japan as well as the Sanrio Japan online store.
Source, images: PR Times
● Want to hear about SoraNews24’s latest articles as soon as they’re published? Follow us on Facebook and Twitter!
[ Read in Japanese ]
Follow Casey on Twitter, where there’s an incredibly high chance he’s listening to some late ’90s J-pop right now.
[ Read in Japanese ]
Follow SoraNews24
© SoraNews24 -Japan News- / SOCIO CORPORATION