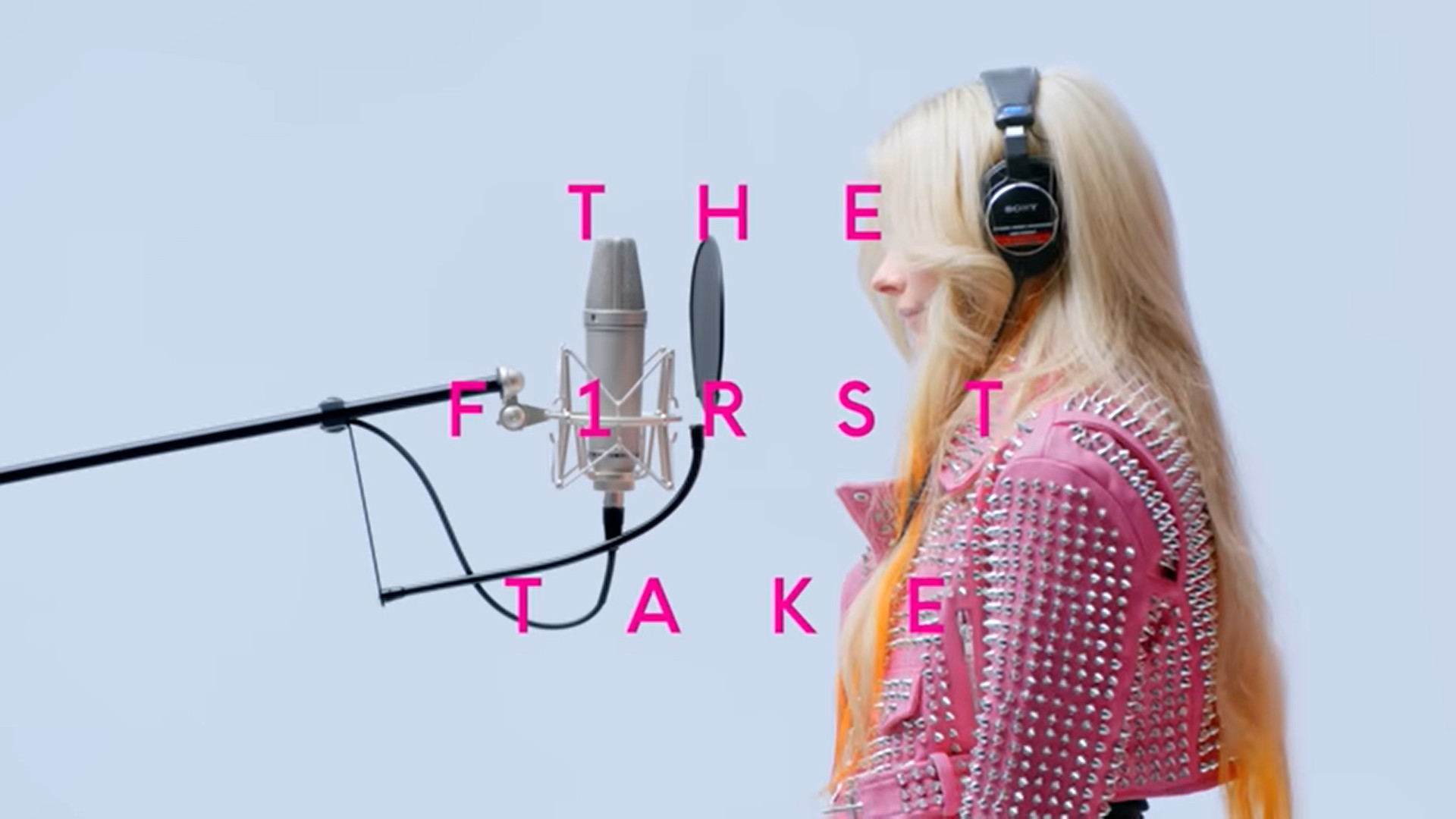 The singer-songwriter’s intimate, acoustic performance on The First Take reminded fans of what made Avril so great in the first place.

If you’re a Japanese music fan and you haven’t heard of the Japanese YouTube channel The First Take, you’ve gotta check it out. The channel’s concept is to have musicians come on set and perform one of their most popular songs in one uncut, unfiltered take, usually accompanied by a simple, acoustic arrangement.

The channel allows fans to experience the genuine talent of singers and songwriters, and to really feel the raw emotion behind the song. Most of the performances have featured Japanese artists, including popular singers and bands like LiSA, Glay, and Kazuyoshi Saito. This week, however, The First Take shocked the Japanese Internet when they posted a one-take video of 2000’s Canadian rock princess Avril Lavigne singing her hit debut song “Complicated” to an acoustic arrangement.
In the video, Avril approaches the microphone somewhat shyly, then, in a mic check, says “Konnichiwa… Hello… Moshimoshi…” as she directs a coy smile to the camera. A moment later, the familiar opening notes of “Complicated” are strummed on a single acoustic guitar, and Avril begins with the her iconic “Uh huh…Life’s like this.” But though the arrangement is simple, it doesn’t lack any of the power or emotion that’s usually packed into the song. It’s enough to get fans feeling like they’ve returned to 2002 again.

Avril’s performance of “Complicated” is partially in celebration of the 20th anniversary of her debut album, 2002’s Let Go, of which “Complicated” was one of her most successful songs. But though 20 years have passed, fans from her early days haven’t forgotten her music or what it meant to them. In just three days, The First Take’s “Complicated” video earned over 3.2 million views.

That’s a testament to just how popular Avril Lavigne was–and still is–in Japan. Not only does she boast over 40 million total worldwide album sales over her career, but she was the first western artist in Japanese history to have three albums in a row to sell over a million copies in Japan.
Avril showed her appreciation for her Japanese fans with her 2014 song Hello Kitty, whose music video was filmed in Tokyo and has costume and set elements inspired by Japanese “kawaii” culture. The song also contains Japanese lyrics, which was a huge hit with her audience in Japan.

Perhaps that’s why her performance on The First Take garnered so many views–because it inspired nostalgia among many Japanese millennials who grew up with Avril Lavigne’s music as the soundtrack to their youth. The YouTube performance had tons of appreciative Japanese comments like:
“I can’t believe this song was released 20 years ago! When this popped up in my recommendations I almost screamed. I listened to this song so much that I could sing along without looking at the lyrics. I loved the music video too.”
“I love Avril! She has a lot of songs but this one is the most iconic. I listened to this song so many times I could never count. It’s nice to hear and see her sing in a venue like this.”
“I never expected Avril of all people to appear on The First Take! AND singing my favorite ‘Complicated’….A queen as always!”
“Ohh this is so good! I got so emotional I cried.”
“This is so nostalgic!! I listened to this a lot when I was in high school. I liked it so much I still listen to it. I’m so impressed that she’s on The First Take.”
Avril isn’t the first international artist to appear on The First Take, as the channel has featured plenty of K-pop artists, but she is only the second western artist to appear in the show. The first was Harry Styles, whose one-take performance of “Boyfriends” appeared on the channel two months ago and was a huge hit with subscribers. With these two singers, each iconic in their own generation, making appearances on the channel, hopefully we can expect more emotional and heartfelt one-take performances from more of our favorite singers from across the world soon!
Source: YouTube/The First Take via Netlab
Images: YouTube/The First Take
● Want to hear about SoraNews24’s latest articles as soon as they’re published? Follow us on Facebook and Twitter!
Follow SoraNews24
© SoraNews24 -Japan News- / SOCIO CORPORATION