Skip to content
Your browser does not support JavaScript, or it is disabled．Please check the site policy for more information.
The Asahi Shimbun
Politics
article
By RYUICHI KITANO/ Senior Staff Writer
September 18, 2022 at 18:23 JST 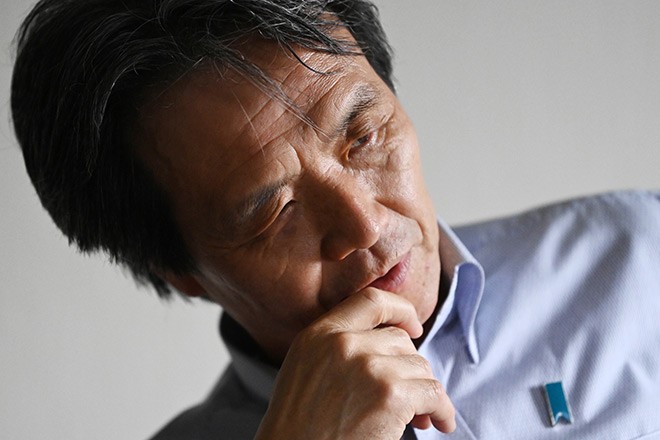 Kaoru Hasuike during an interview with The Asahi Shimbun in Kashiwazaki, Niigata Prefecture, in August (Sayuri Ide)
KASHIWAZAKI, Niigata Prefecture–Even 20 years after he returned to Japan following his abduction to North Korea, Kaoru Hasuike says he dare not publicly tell all about what he knows for fear of compromising the safety of other Japanese abductees still stuck in the reclusive country.
Hasuike, 64, returned to Japan in 2002, along with four other abductees, as a result of a landmark visit to Pyongyang by Prime Minister Junichiro Koizumi that year, the first and only Japanese leader to have done so.
He languished in North Korea for 24 years after being snatched with his girlfriend by North Korean agents.
After years of labeling Japanese allegations of abductions as “fake,” North Korea suddenly reversed its position when Koizumi flew to Pyongyang on Sept. 17, 2002, for historic talks with North Korea’s leader, Kim Jong Il, holding out the prospect of economic aid and establishing formal diplomatic relations if the abduction issue was resolved.
Hasuike was one of five Japanese that Kim acknowledged were still alive. Kim asserted that eight others Japan was keen to know about had died.
The Japanese government believes as many as 12 Japanese are still being held in North Korea against their will.
North Korea carried out the abductions in the 1970s and ’80s to train its agents in Japanese culture, customs and language.
In a recent interview with The Asahi Shimbun in Kashiwazaki, where he lives with his family, Hasuike recalled that his and his wife’s return to Japan in 2002 was supposed to be a temporary visit, as North Korean authorities had told them beforehand that this was the arrangement the two countries had agreed upon.
“I expected to go back to North Korea because I left my children there,” he said.
He and Yukiko, then his girlfriend whom he married in North Korea, were abducted together from Kashiwazaki in 1978. The couple raised two children in North Korea.
But he decided to wait for their offspring to join them in Japan to live permanently, rather than go back to North Korea, after relatives here persuaded the couple to remain.
He subsequently informed the Japanese government that the couple had decided not to go back to North Korea.
The Koizumi administration made a point of stating that the returnees would remain in Japan as a matter of official policy.
When former Prime Minister Shinzo Abe, a key player in efforts to resolve the abduction issue, was gunned down in July, Hasuike and his wife released a statement saying they “were shocked and extremely saddened” by his death.
Hasuike said he felt “indebted” to Abe for the way he responded to the abduction issue while serving as deputy Chief Cabinet secretary.
Their children joined them in Japan in May 2004, ending a 19-month separation. Hasuike recalled it was a long and trying wait.
“I tried very hard to put my faith in our family’s reunion and focus on my work as my wife and I endured the wait,” he said. “Somehow, I managed it. I could afford to think about my own life and living only after my children came to Japan to be with us.”
Hasuike re-enrolled in Chuo University in Tokyo, which he was attending when he was abducted, to finish his studies.
After graduation, he began teaching Korean at Niigata Sangyo University in Kashiwazaki and is now an associate professor at the school. He has also translated books published in South Korea into Japanese.
In 2012, Hasuike published his book, “Rachi to Ketsudan” (Abduction and decision), focusing on his daily life in North Korea.
COMING TO TERMS WITH ORDEAL
“It took me 10 years to express my thoughts publicly,” he said of the book. “A minimum requirement to convince myself that I was right about remaining in Japan was that our children born in North Korea would grow motivated in life and become self-reliant in this country.”
Hasuike recounted that he tried very hard to accept the way of life in North Korea after he was taken there against his will.
“It is not a case that I hated everything while I lived there,” he said. “My family and I had to survive by accepting the fact we were in North Korea. But that does not mean I adopted everything.”
Even though his book revolved around his daily experiences in North Korea, he hardly mentioned the organization responsible for the abductions and other Japanese abductees still living there because the issue had yet to be resolved.
“I did not want to cause any harmful effects to bilateral talks on the question and safety of other Japanese abductees,” he said.
But Hasuike said he is resolved to publish details of what he heard and saw in North Korea as a record for when the appropriate time comes but not before in case it adversely affects any parties.
Pyongyang now contends the abduction issue was settled, having said earlier it had no records of others being alive.
Hasuike visits dozens of places across Japan each year to speak about his experiences in North Korea, his endeavors to help keep the abduction issue alive and resolve it as early as possible.
“Parents of victims are now very advanced in years and some of them have passed away after all these years,” he said. “The abduction issue will never be put to rest unless parents can meet their children again while they are alive.”
20 years fly by, and no progress is made on abduction issue
EDITORIAL: Pyongyang Declaration key to breakthrough in N. Korea ties
Families of North Korea abductees demand their quick return
Biden reaffirms U.S. effort to resolve N. Korea abduction issue
INTERVIEW/ Joseph Yun: Biden’s best bet is to engage with N. Korea directly
Power of words only means left to bring abductees home