Skip to content
Your browser does not support JavaScript, or it is disabled．Please check the site policy for more information.
The Asahi Shimbun
National Report
article
By GAKUSHI FUJIWARA/ Correspondent
September 10, 2022 at 13:30 JST 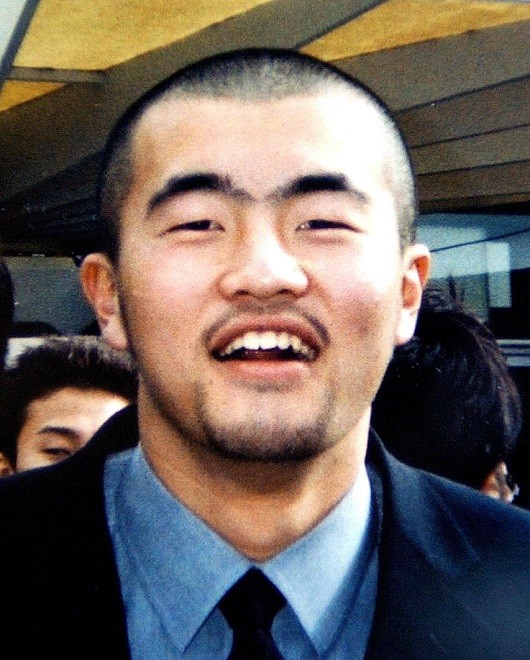 Toshiya Kuge smiles in a picture taken at his coming-of-age ceremony in January 2001. (Provided by bereaved family)
Once again in September, after a summer of restlessness, Yachiyo Kuge has become so overwhelmed with emotion that she feels unable to do anything.
But as she has done so many times in the past, Kuge will collect her thoughts and travel overseas to mark the anniversary of her son’s death.
It will be her first visit to the United States on 9/11 in three years.
CRASH IN SHANKSVILLE
In 2001, Kuge’s second son, Toshiya, a 20-year-old sophomore at Waseda University, was on United Airlines Flight 93, which took off from Newark International Airport at 8:42 a.m. and was bound for San Francisco.
But he and the 36 other passengers and seven crew members never reached their destination.
The plane was hijacked by four al-Qaeda terrorists and crashed in a rural area in Shanksville, Pennsylvania.
At her home in Osaka, 11,000 kilometers and a 13-hour time difference away, Kuge was watching a TV news broadcast that showed two airplanes crashing into the World Trade Center in New York.
It was late at night in Japan, and she took the family dog for a walk. She asked the canine, “Is Toshiya-kun OK?”
LOVED U.S. CULTURE
Toshiya loved American sports and culture. He listened to foreign music CDs, and at night, he often watched American football games on television.
“I want to excel in the United States,” he told his high school friends.
In March 2001, Toshiya took a short-term language course, which strengthened his desire to study abroad.
In late August, he traveled to Canada and the United States and visited the campuses of Columbia University and the Massachusetts Institute of Technology, as well as Niagara Falls and the Statue of Liberty.
Before the trip, Toshiya visited his mother in Osaka, and they went shopping at a nearby Tokyu Hands to buy a black passport case for him.
Kuge thought the strap of the case was a bit loose, so she machine-stitched and reinforced it.
At the entrance of Shin-Osaka Station, Toshiya told her: “Here is fine. You can go home.”
“Take care,” she said.
Kuge watched her son wander into the station. It was the last time she saw Toshiya.
HOMEMADE JAPANESE FLAG
On the morning of Sept. 12, when Toshiya’s flight from San Francisco was scheduled to land at Kansai International Airport, Kuge received a call from the Foreign Ministry. Her mind temporarily went blank.
Staff at United Airlines came to see her, and she asked if there was any chance that Toshiya survived.
She could not believe her son was dead.
As soon as she obtained a passport, she took a flight from Kansai to San Francisco and followed Toshiya’s travel route in reverse direction.
After several days, Kuge arrived at the crash site in Pennsylvania.
“I’m just a regular person. I don’t understand terrorism or war at all,” she said.
Everywhere she went in the United States, she saw Stars and Stripes flags. It was surreal to her.
She asked an employee of the Japanese consulate general for red and white fabrics and scissors.
Using a coffee pot in her hotel room, she cut a circle from the red fabric and sewed it on the white fabric to create a Japanese flag.
Kuge left the homemade flag among the countless U.S. flags at the crash site.
She received Toshiya’s remains identified through DNA tests–shoulder bones, coccygeal bones and the first toe on the right foot–in a large casket.
She also received the passport case.
It has been on display at the National September 11 Memorial and Museum in New York.
PANDEMIC HALTS PLAN
Since 2002, Kuge had spent every Sept. 11 at the crash site.
She has also visited all the places that Toshiya traveled to because she wants to breathe the same air he breathed and stay as close to him as possible.
But the COVID-19 pandemic disrupted her schedule. She was unable to travel to the United States for the 9/11 anniversaries in 2020 and 2021.
“My son must be feeling lonely. I can finally go see him,” she said of her plans to visit the crash site for the first time in three years. “I want to call his name, stay close with him.”
Citing her age and health, Kuge said there is no guarantee she can travel to the United States next year.
“This year could be my last,” she sometimes thinks.
“But, compared to what my son went through, me going to the site should not be a challenge,” she said.
Kuge remains in touch with many of Toshiya’s friends, other bereaved families and people who helped her 21 years ago.
The network is even growing, she said.
“I think my son wanted to know more about America,” she said. Doing so on behalf of him “will be the best service for him.”
At the Flight 93 National Memorial in Shanksville, the names of the victims are inscribed on 40 marble stones.
Toshiya’s name appears in romaji and kanji characters. Kuge wrote the kanji.
She said she plans to rub the names this year and say: “Your mom is here. Are you still abroad studying?”
It’s been more than two decades since the terrorist attacks. Kuge said she cannot picture how her son would have looked today.
“I don’t know what his old face looks like,” she said.
Kuge added: “I wish I could do more for him. He gave me a lot of joy for 20 years. But he had many more years to come.”