Skip to content
Your browser does not support JavaScript, or it is disabled．Please check the site policy for more information.
The Asahi Shimbun
National Report
article
By RYOHEI MIYAWAKI/ Staff Writer
November 15, 2022 at 07:10 JST 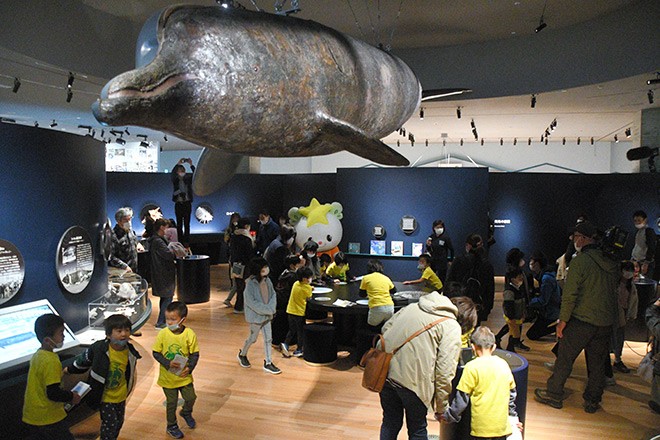 A stuffed specimen of a Baird’s beaked whale hangs from the ceiling of the Rikuzentakata City Museum in Rikuzentakata, Iwate Prefecture, on Nov. 5. (Ryohei Miyawaki)
RIKUZENTAKATA, Iwate Prefecture—A museum destroyed in the 2011 tsunami disaster is finally back in business after exhibits inundated with seawater and mud have been restored with help from experts in and outside the prefecture.
The Rikuzentakata City Museum reopened Nov. 5 at a new site in a corner of an urban area elevated from the ground by about 10 meters that is lined with commercial facilities.
More than 90 percent of the roughly 7,300 exhibits were restored from damage from the tsunami generated by the magnitude-9.0 Great East Japan Earthquake on March 11, 2011.
A 10-meter-long stuffed specimen of a Baird’s beaked whale, the centerpiece exhibit, hangs from the ceiling, with some parts left as they were as evidence of tsunami damage.
The specimen, originally on display at the Museum of Oceans and Shellfish, another facility in Rikuzentakata destroyed in the tsunami, was restored at a branch of the National Museum of Nature and Science in Tsukuba, Ibaraki Prefecture.
In one section at the new museum, technicians can be seen restoring tsunami-damaged items behind the glass. Panels also present the post-disaster project to rescue cultural properties.
“We can play an important role in promoting our experience of restoring disaster-damaged cultural properties to the world,” said museum director Yasumori Matsuzaka during a media preview Oct. 28.
Towering tsunami flooded the municipal museum to the ceiling of the second floor. All six museum staffers perished.
About 230,000 items were inundated with seawater and mud, except for a small portion that had been rented out to other facilities.
The reconstruction project began in April 2011, one month after the disaster.
As part of the rescue project, officials from the Iwate Prefectural Museum in Morioka and other facilities carried cultural properties out of the destroyed museum for storage in the prefectural museum and elsewhere with assistance from the Ground Self-Defense Force.
Gaining help from experts at the Tokyo National Museum and other institutions outside the prefecture, they proceeded with the restoration work, which included removing salt and dirt.
Of the 560,000 or so items housed at the municipal museum and three other cultural facilities in Rikuzentakata before it was devastated by the tsunami, about 460,000 pieces were saved.
About 300,000 items have been fully restored. Restoration work on the remaining 160,000 items continues.
The new museum has been integrated with the Museum of Oceans and Shellfish.
The two-story museum building featuring a large black roof was completed in July 2021 after restoration work on damaged artifacts and land elevation work were finished.
The building had to sit idle for a while before the reopening to stabilize the internal environment by keeping the facility constantly ventilated to remove the influence of paint and other chemical agents used during construction work.
The museum also features stone markers inscribed with lessons from past tsunami disasters found on the Sanriku coast of northeastern Japan along the Pacific Ocean.
Chief curator Masaru Kumagai, 56, said, “We want to unravel historical facts, including the earthquake and tsunami disaster, for future generations.”

Post office in Tohoku reopens 11 years after quake, tsunami
Tsunami-hit cities keen to offer homes to Ukrainians
Survivors pray at monuments 11 years after Tohoku disaster
Municipalities are starting to scale down their 3/11 memorials
Museums with 3/11 stories to tell go online due to pandemic
2011 disaster threatens to end age-old cultural practices