Skip to content
Your browser does not support JavaScript, or it is disabled．Please check the site policy for more information.
The Asahi Shimbun
Culture
Style
article
By KENSAKU NISHIDA/ Staff Writer
November 21, 2022 at 07:00 JST 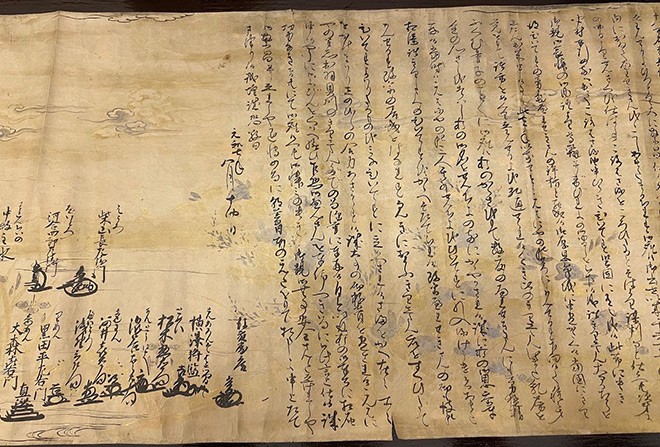 A previously unknown reply to Pope Paul V in the 17th century by Christians in Japan’s Tohoku region recently turned up in Florence. (Provided by Sophia University professor Shinzo Kawamura)
Researchers were stunned to come across a previously unknown letter of appreciation sent by Christians in Japan’s northeastern Tohoku region to the pope during the early Edo Period (1603-1867) … in Florence that is, not the Vatican.
It is the first such discovery of its kind.
The artifact was sent in reply to a missive penned by Pope Paul V, whose papacy started in 1605 and ended 1621, to offer encouragement to Japanese Catholic converts who faced persecution from feudal authorities at the time.
No such documents had previously been found outside the Vatican.
This discovery came about from an on-site study under a program called “Vatican & Japan: The 100-Year Project” organized by the Kadokawa Culture Promotion Foundation and sponsored by The Asahi Shimbun.
Shinzo Kawamura, a professor of history at Sophia University in Tokyo, headed the research and uncovered the letter based on information provided by Timon Screech, a history professor at the International Research Center for Japanese Studies in Kyoto.
Similar appreciative notes were delivered between 1620 and 1621 from five areas across Japan, including what is now Nagasaki Prefecture as well as the current-day Kinki and Tohoku regions. They are kept at the Vatican Apostolic Library.
The latest letter was found at the Dominican Convent’s library that belongs to a church in Florence.
The contents are the same as those copies of two replies from the Tohoku region that are stored at the Vatican. It includes the name of Goto Juan (1578-1623), who believed in Christianity as a retainer of famed warlord Date Masamune (1567-1636), among other individuals.
The word “first” is written in Latin on the back while the ones in the Vatican refer to themselves as “second” and “third,” additional research showed.
“The one at Florence is very likely the original letter,” Kawamura said.
“Multiple copies were apparently made in an attempt to defend the Society of Jesus, which was then blamed for not having prevented the religious ban, against a range of critics,” he also said.
Details of the finding were unveiled at a symposium on the project held at Sophia University on Nov. 12. For more information, visit the project’s website at (https://vj100.jp/en/).
Pope visits Jesuit Japan community that could have been his
Citizens, scholars demand free expression show be reopened
Pope promises Fukushima visit, answering plea from bullied boy
Students invited to pope’s event after visit nixed in Hiroshima
As Xi heads to Italy, Vatican says China should not fear Church
Pope might meet with ex-death row inmate while visiting Japan