Skip to content
Your browser does not support JavaScript, or it is disabled．Please check the site policy for more information.
The Asahi Shimbun
Opinion
Vox Populi
article
Vox Populi, Vox Dei is a daily column that runs on Page 1 of The Asahi Shimbun.
November 16, 2022 at 14:41 JST 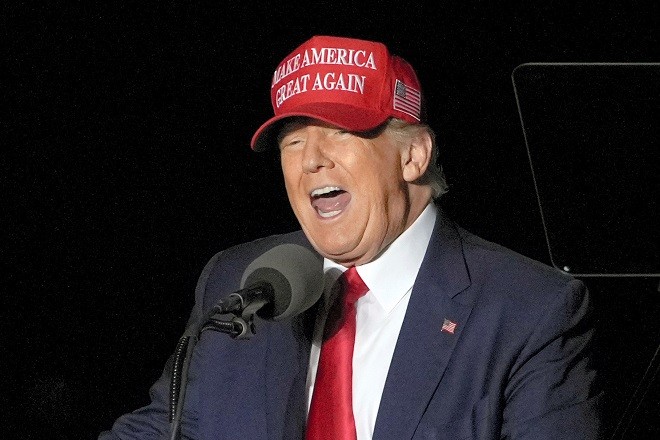 Former U.S. President Donald Trump speaks to his supporters at a rally in Latrobe, Pennsylvania, on Nov. 5. (The Asahi Shimbun/ Nobuo Fujiwara)
American aviator Charles Lindbergh (1902-1974), famed for his historic 1927 nonstop solo trans-Atlantic flight, attended a rally in Iowa in September 1941 when the Nazi persecution of Jews was escalating in Germany.
In his speech, the celebrated national hero asserted that American Jews “wish to involve us in the war” while bringing influence to bear upon the U.S. government through their widespread power over motion pictures, press and radio.
The rally was sponsored by the America First Committee, an isolationist pressure group characterized by anti-Semitic and pro-fascist views of some of its influential members that roused the public into defending the nation’s white population from “foreigners” and ignoring any criticism.
Does this remind you of someone?
Former U.S. President Donald Trump, of course.
Still continuing to spout the conspiracy theory that a “deep state” clandestine network is running the United States, Trump has announced his 2024 presidential run.
With the Republican Party’s unexpectedly poor showing in the midterm elections, I understand that some party members have begun to openly voice anti-Trump views.
But he is obviously not so thin-skinned as to flinch. On the contrary, he may well start spewing more profanity and insults to fan divisiveness. I cannot be optimistic.
“The Plot Against America,” a 2004 novel by Philip Roth (1933-2018), presents an alternative history in which Lindbergh is tapped to run for president, wins the party nomination and defeats Franklin D. Roosevelt (1882-1945) in the 1940 election.
In the novel, the moment Lindbergh wins the presidential nomination at the 1940 Republican Party Convention, people groan elsewhere in amazement and dismay.
Under the Lindbergh administration, the novel’s Jewish protagonist becomes caught in a storm of anti-Semitism.
In real life, the next presidential election is two years from now. Will the Republican Party be reborn?
The last thing I want is to have to groan in disgust and disbelief again.
–The Asahi Shimbun, Nov. 16
* * *
Vox Populi, Vox Dei is a popular daily column that takes up a wide range of topics, including culture, arts and social trends and developments. Written by veteran Asahi Shimbun writers, the column provides useful perspectives on and insights into contemporary Japan and its culture.
Democrats keep Senate majority as GOP push falters in Nevada
EDITORIAL: Midterms give mixed signals about future of U.S. democracy
VOX POPULI: U.S. midterms show the glaring divisions still rife in the nation
Intruder attacks Pelosi’s husband, calling, ‘Where is Nancy’
EDITORIAL: Ruling parties won, now face test of ‘defending’ democracy
VOX POPULI: Living up to our climate rhetoric means accepting higher oil prices