Skip to content
Your browser does not support JavaScript, or it is disabled．Please check the site policy for more information.
The Asahi Shimbun
Business
article
THE ASAHI SHIMBUN
April 16, 2022 at 16:39 JST 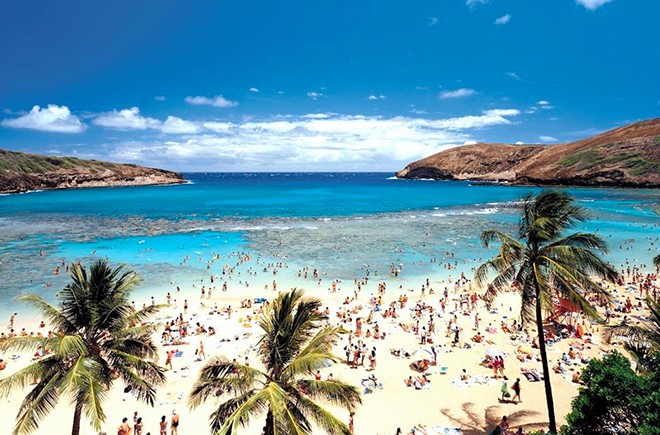 Idyllic Hanauma Bay on the island of Oahu in Hawaii (Provided by H.I.S. Co.)
Travel agencies and airlines are moving to cash in on an expected boom in overseas travel following eased re-entry restrictions, and Hawaii, which used to be the top destination for Japanese honeymooners, is back on the list of places to visit.
With the Golden Week series of national holidays just two weeks away, the government moved to make it easier for inbound and outbound travel after two years of travel restrictions due to the COVID-19 pandemic.
Major travel agency JTB Corp. resumed taking reservations from April 15 for tours to Hawaii departing from Haneda Airport in Tokyo and Kansai International Airport in Osaka from April 28.
JTB had not taken reservations since March 2020, but Japanese tourists will now be able to once again soak up the sun’s rays on beaches in Waikiki and climb Diamond Head. COVID-19 cases in Hawaii have stabilized and entry restrictions have been relaxed by the state government.
Another leading travel agency, H.I.S. Co., also plans to resume taking reservations soon for Hawaii tours departing on May 1. The company’s local branch will provide around-the-clock support to Japanese tourists choosing to travel with the company.
An official with KNT-CT Holdings Co., a travel conglomerate that includes Kinki Nippon Tourist Co., said the company was also considering resuming tours to Hawaii.
The government relaxed its advisory for traveling abroad from April 1 for 106 nations, including the United States. The level 2 advisory only asks for restraint in unnecessary travel, while the previous advisory until March recommended cancelling all overseas trips.
Under the previous protocol, returning Japanese nationals from the United States had to self-quarantine for three days in designated lodging accommodation, but that measure was exempted from March for those who had received three COVID-19 vaccinations.
As of April 15 only seven nations, including South Korea and Vietnam, were still covered by the self-quarantine request, according to the Foreign Ministry. That represented a sharp decrease from the 87 nations and regions covered as of Feb. 2, due in large part to concerns about the spread of the Omicron variant of the novel coronavirus.
The two major airlines have also resumed selling tours to Hawaii and they plan to increase the number of flights over the Golden Week period that runs into early May.
All Nippon Airways now operates three roundtrip flights between Haneda and Honolulu every week, but one additional roundtrip flight will be added during Golden Week.
A company official said some flights are already close to being fully booked.
Japan Airlines will also add flights over Golden Week on its routes from Haneda and Narita Airport to Honolulu.
An ANA official said the number of passengers flying to Hawaii is still only about 10 percent of the level of 2019 before the pandemic struck. Even so, the company is pinning its hopes on more Japanese opting to journey to Hawaii.
According to the Hawaii state government, only about 24,000 Japanese entered in 2021, down a whopping 98 percent from the 1.576 million who went there in 2019.
Travel agencies are also expected to increase the number of tours to Asia and Europe.
(This article was written by Go Takahashi and Shinya Matsumoto.)
ANA, JAL cancel 32 flights to Europe over crisis in Ukraine
American Airlines restarts China flights, bringing U.S. weekly total to 10
Airlines stop taking bookings of non-Olympic passengers
Haneda Airport to allot half of new slots to Japan-U.S. route
Regional airline offers aerial tour of Mt. Fuji, closed to climbers
ANA, JAL move up final call to arrive at airport security checks